Everyone realizes the importance of music in our lives.  For centuries live music
performances in all cultures have excited, soothed and inspired.  People have various
forms of music that they turn to either daily or when particular life events occur.
Hearing music from any era can trigger memories and induce copious emotions. 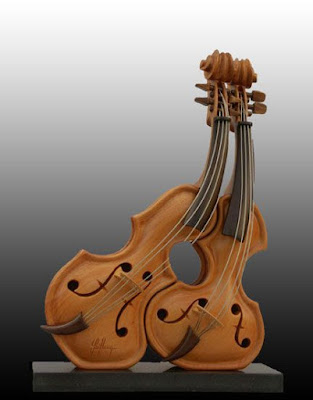 I have always been aware of the way the arts intertwine but the death of John Prine
got me thinking about the way music has inspired visual artists and visa versa.  I have
a family friend who is a painter and illustrator and often mentions the music he listens
to while creating in his studio.  John Prine's music has been such a source for John
Coburn and that connection inspired me to research a few other artists. 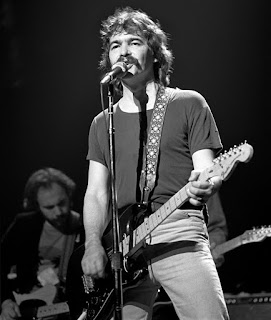 A few pieces of the vast and wonderful collection of John Coburn, Toronto: 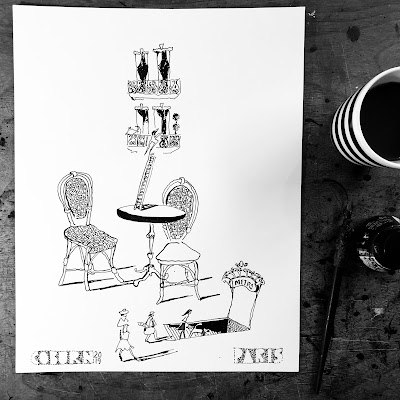 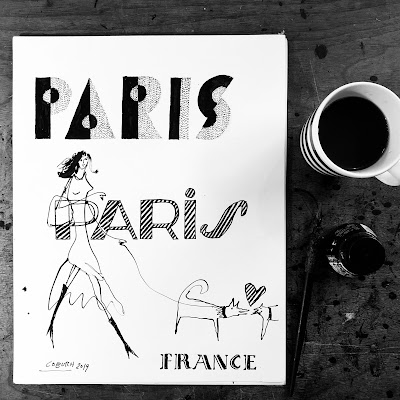 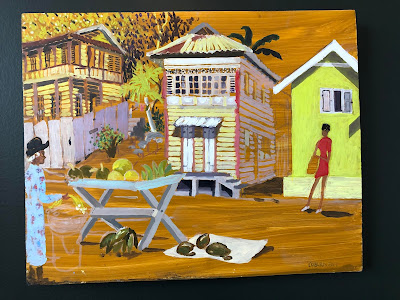 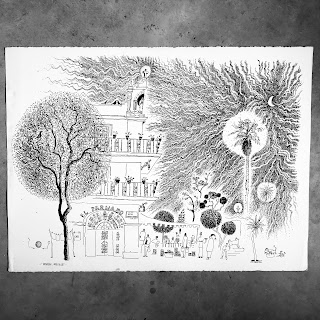 
I found a few articles on-line, mainly in Arts Magazines, that discussed art works that
were created with the "ears" of the artist as well as the hands.  I decided to look into a
few visual artists, mainly painters, that readers would likely recognize and look at
their musical preferences.  My art history education provided many ideas for this post.

It appears that a direct correlation between specific musicians and visual artists was not
noted until the late 1800's.  There were a number of musicians whose compositions
were directly inspired by paintings.  For example, Respighi created a symphony in 1919
based on Renaissance master Botticelli's painting "Primavera", 1482. 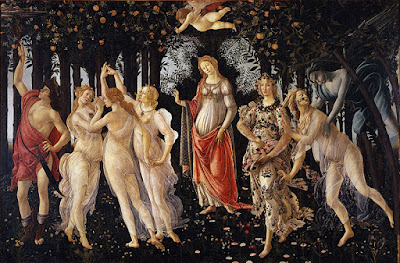 Leonardo Da Vinci's painting may not have been influenced directly by music but I
must mention the most famous painting in the world, "Mona Lisa" 1503.  Nat King
Cole crooned about her illusive smile in Ray Evans and Jay Livington's popular song
"Mona Lisa" 1950. 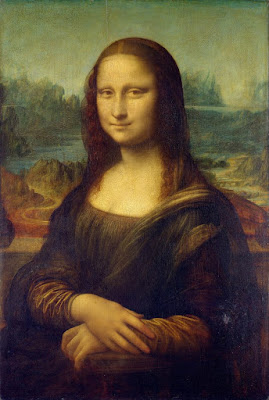 In Japan in c.1829-1833 Hokusai made his famous print "The Great Wave" and one
hundred seventy years later, Debussy wrote "La Mer"1905, inspired by Hokusai's art. 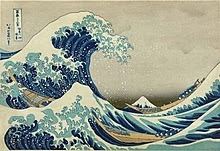 Impressionist George Seurat's painting of "A Sunday Afternoon, La Grande Jatte"
1884 is iconic.  Stephen Sondheim wrote the music and lyrics for a Broadway musical
called "Sunday in the Park with George", based on a book by James Lapine. 1984 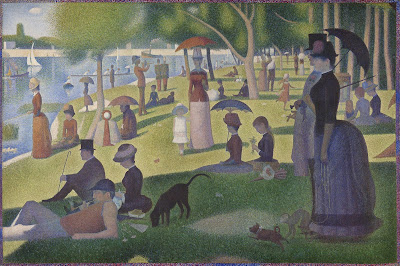 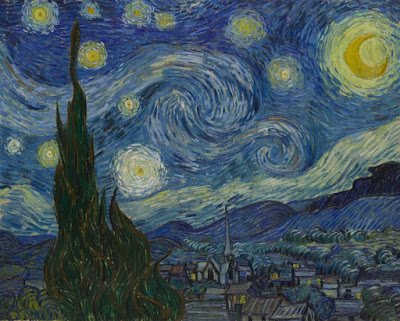 Whistler, famous for the painting of his Mother, painted a series of moody fog-
filled canvases in London, 1871.  Each featured a different colour palette and were titled
Nocturnes after Chopin's solo piano compositions in 1831 "The Nocturnes". 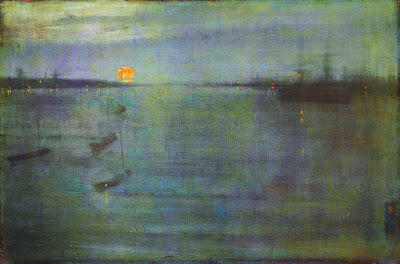 "Nocturne in Blue and Gold" Whistler

Wassily Kandinsky is one of the first painters of the Twentieth Century to explore
Abstract Art where colours, shapes, line and form become the main subject matter
of a canvas.  He embraced scientific theories about colour and the spiritual aspects
of music, specifically inspired by the music of Ravel, Stravinsky, Wagner and
Rimsky-Korsavov.  Kandinsky often titled his paintings with musical references
such as "Composition 8."  In 1928, Kandinsky mounted a Bauhaus stage
production based on Mussorgsky's 1874 music, "Pictures in an Exhibition". 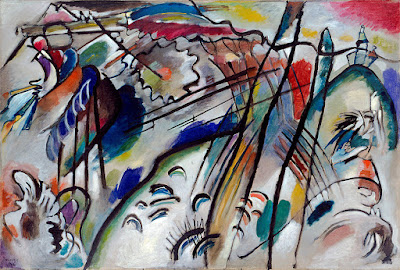 Picasso was influenced by Spanish Classical Music.  He was friends with many
musicians including Stravinsky and created over seventy paintings and collages
featuring the violin and the guitar. 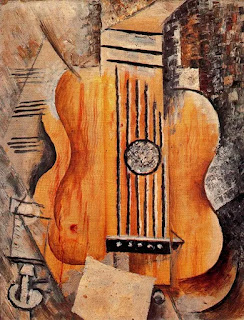 Piet Mondrian created abstract paintings that reduced the elements of art to their
basics.  Colour and shapes were arranged according to the rhythm of life that
surrounded Mondrian in modern New York city.  He believed in the spiritual
power of music and used that inspiration in his work. 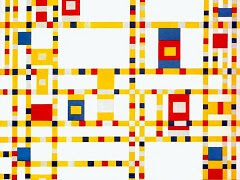 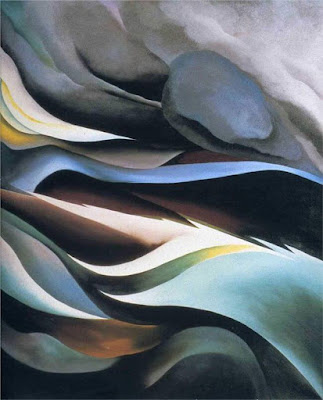 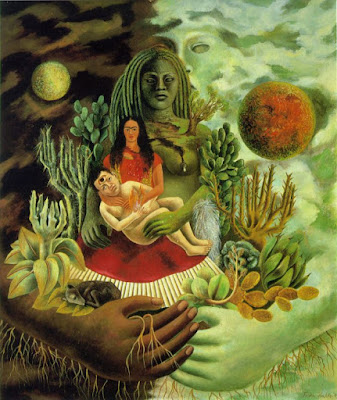 "The Love Embrace of the Universe" Frida Kahlo 1949

Barbara Hepworth, a British Sculptor, incorporated themes of music and
movement in all her work.  Her musical mentors were Thomas Tallis, J.S Bach,
Stravinsky and Benjamin Britten.  Her personal friend Priaulx Rainier
experimented with unique forms of modern music and Hepworth and Rainier
collaborated in a performance where her syncopated hammering on stone was
integrated with his percussive soundtrack.  Movement and rhythm in Hepworth's
sculpture reflect her belief in organic living.  She was very conscious the earth's
daily and seasonal changes and the harmony in nature. 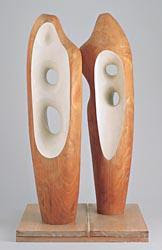 Jackson Pollack is famous for his "action painting" where he "danced around" a
canvas on the floor frenetically dripping layers of paint while listening to music
that provided energy and rhythm as he created.  Dizzy Gillespie's Jazz was his
favourite. 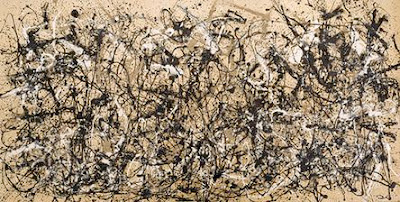 Henry Moore preferred Classical and Choral music.  He believed that "Art
should have a certain mystery and make demands on the viewer".  Nature's
forms and spiritual music inspired Moore to sculpt with that purpose.
Murray McLachlan wrote a song in 1974 "Down by the Henry Moore"
to honour Moore's sculpture "The Archer" at city hall Toronto. 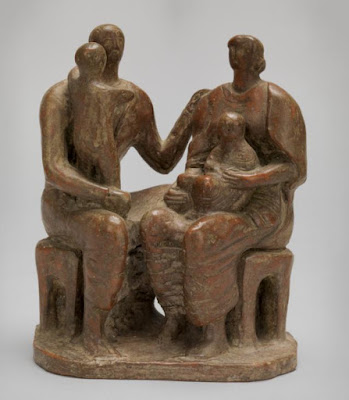 In an overview of famous artist's I could not leave out Andy Warhol.  He was
into Contemporary Folk, Rock and Pop music.  He managed the band
Velvet Underground who performed in his studio space known as 'The Factory'.
Warhol designed album covers for  Diana Ross, "Silk Electric" the Rolling
Stones, "Sticky Fingers", Aretha Franklin's "Aretha", Liza Minelli's "Live at
Carnegie Hall" and John Lennon's posthumous "Menlove Ave."

Warhol created many iconic images of 20th century America and his work
influenced many facets of Pop Culture, especially music.  David Bowie
composed a song to celebrate "Andy Warhol".  Lou Reed and John Cale wrote
an entire album as a tribute to Warhol.  It's title "Songs for Drella" used
Warhol's nickname, a combination of Dracula and Cinderella. 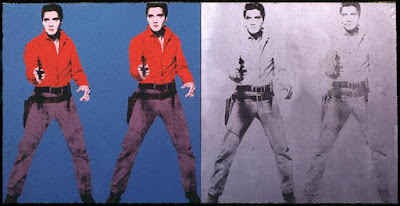 I take my coffee with milk.